The Standard Edition is one of two cloud-hosted annual subscription options (the other is the Premium Edition) that contain the LabLynx webLIMS application along with sciCloud.net®, LIMSforum.com and the other available options, along with an included Service Plan. The Standard Edition may be the cloud-hosted option that makes the most sense for your lab, especially if you don't have a lot of users and that's unlikely to change anytime soon. The LabLynx webLIMS LIMS/LIS is included in the annual subscription, as well as an annual service plan plus all of the sciCloud.net® applications and LIMSforum.com resources provided in every edition.

The reason this edition is particularly suited to small-to-medium labs without planned expansion anytime soon is that it is the only edition whose subscription is priced by named user. This means that you pay your annual subscription based on the number of actual users with access (this never includes external clients accessing their reports through the portal - those are free and unlimited). This is often compared against the Premium Edition, which is priced by concurrent user; that is, you may have any number of users named in the LIMS but only the number cited in the subscription may use it at the same time. It can be cost-effective to go with the concurrent subscription if, for instance, you hire more people but are able to spread working ours out longer, so that instead of, say, 5 users working 8 hours, you increase to 10 but the lab stays open for 18 hours. Your concurrent user subscription would not have to change, but if you have a named user subscription you would have to double the users on it. However, if you are only adding one or two users it may still be cheaper to go with the Standard named user subscription.

Remember that regardless of which edition you choose for your LIMS or LIS solution, you always need to factor in the hourly services involved for implementation, including:

"I'm still not sure I get it. How about an Example?"

OK. Say you have a NextGen lab with four people you know will be using the LIMS/LIS. Remember, you can also have any number of outside clients submit samples and/or view their reports online with no additional charges if you have the portal implemented. You do testing for outside physician clients, and you also send some specimens out to a reference lab for testing. Here's how it might break down: 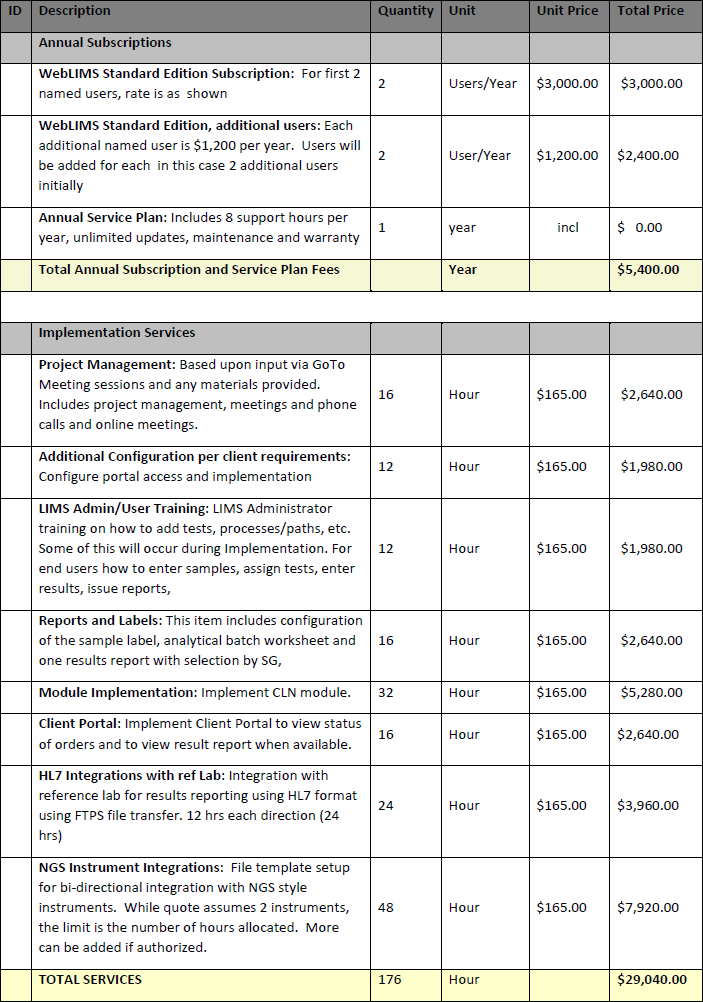 As we mentioned, this edition is most often compared with the Premium Edition option, so take a look at that to get an idea of which might work best for you - or either of the other editions. To compare, four concurrent users in the Premium Edition would be $6,000 (first two users) + $4,800 (two additional users @ $2,400 each) = $10,800 -- as compared to $5,400 total for four named users in the Standard Edition. But to make sure you get the right solution package and edition, always talk to your LabLynx, Inc. representative. See the Company section of the LabLynx.com website for Contact Information.